The UK’s decision to leave the EU has opened the door to a reform of its regulatory system for pesticides. The UK Government has already created its own standalone system which, at present, closely mirrors the EU regime. However, the pesticide industry and other groups advocating for industrial-scale agriculture are actively lobbying for the UK to move away from its current approach to pesticides, with the aim of increasing the range of chemicals available for use.

The UK – along with the EU – currently follows a version of what is known as the ‘hazard-based’ approach to pesticide regulation. This follows the principle that if an active substance possesses intrinsically hazardous characteristics – for instance by being able to cause cancer or persistent pollution – then it is simply considered too dangerous to be used safely and should not be authorised. In contrast, almost all other countries, (including the US) follow a ‘risk-based’ approach. This model places greater emphasis on assessing and managing the risks of the chemical in use, and relies on the deployment of checks and measures to keep these risks below acceptable levels.

This PAN UK policy briefing explores the so-called ‘hazard-based’ and ‘risk-based’ approaches to pesticide regulation and how other hazardous industries manage hazard and risk. It looks at the increased burden on both farmers and the regulatory authorities of moving to a weaker risk-based system, and the extra control measures that would be needed in order to maintain current levels of environmental and health protection. It provides case studies from both the EU and US to contrast how these two systems play out in the real world.

Ultimately, the paper concludes that it is firmly in the UK’s interest to maintain a hazard-based approach to pesticide management to protect environmental and human health and to minimise regulatory complexity and cost. 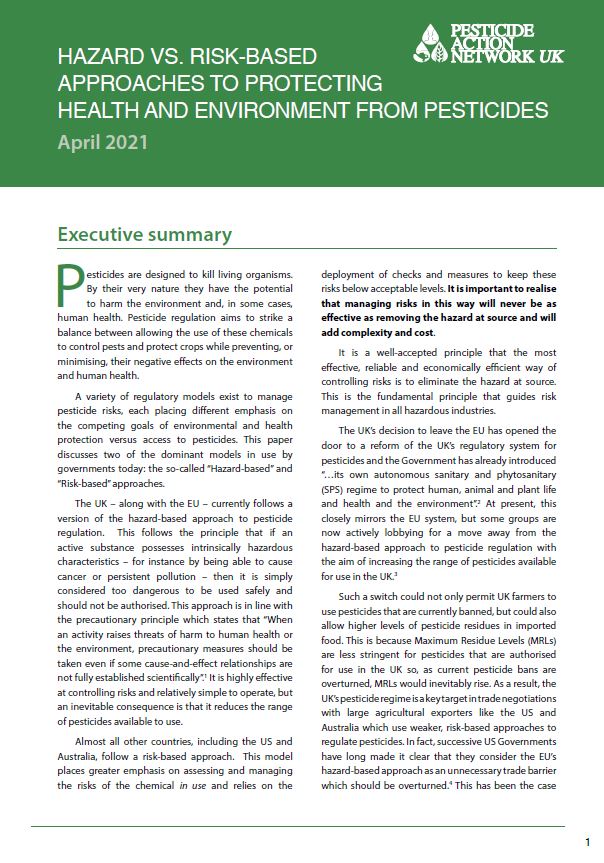