Pesticides impact nearly all life on earth. Pesticides are designed to kill pests. They include a wide range of compounds including herbicides (designed to kill plants), insecticides, fungicides, rodenticides, molluscicides and nematicides, but also include plant growth regulators, defoliants and desiccants. They are mainly used in the growing of agricultural crops, but are also used in our towns, cities, homes and gardens.

Contemporary pesticide products consist of active and inert ingredients. The active ingredient is the chemical designed to kill the targeted pest. However, inert ingredients often make up the bulk of the product and include emulsifiers, solvents, carriers, aerosol propellants, fragrances and dyes. There is no requirement for pesticide manufacturers to disclose a list of the inert ingredients in their products. 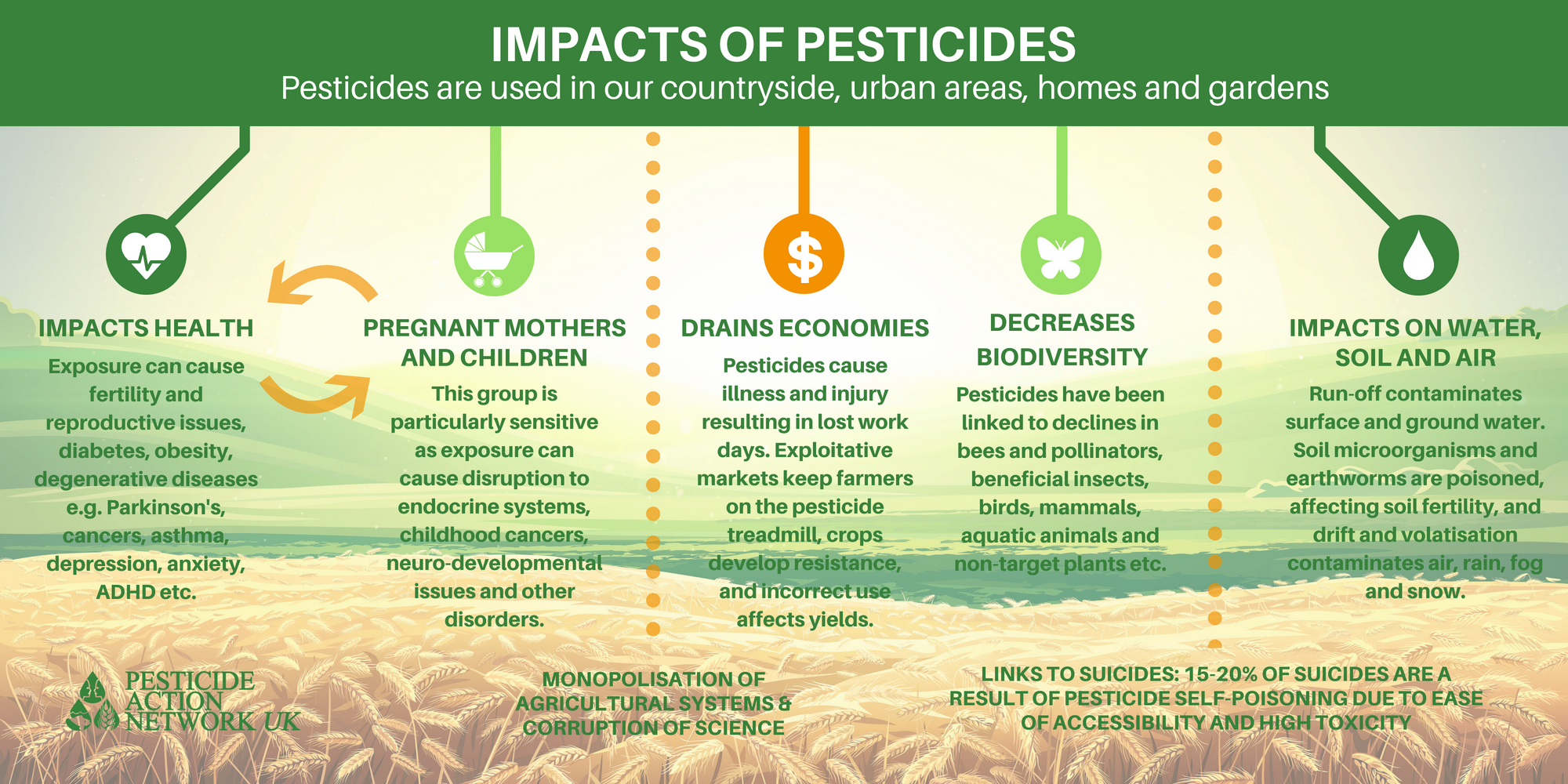 A brief history of pesticides

Pesticides have been used for centuries. In fact, the first recorded use of pesticides was in around 2500BC where sulphur was used as an insecticide in ancient Mesopotamia. By the 15th century arsenic, mercury and lead were the main chemical elements in use. The manufacture of synthetic pesticides became widespread in the 1940s with the insecticide DDT becoming the best known. It was first used by the Allies in World War II to control typhus and malaria and became available to the public in 1945. Latterly, in the 1970s, the world’s most widely used herbicide, glyphosate, came on the market. Manufactured by Monsanto, it is the active ingredient in many weed killers, including Roundup, is widely used by farmers and groundskeepers globally and is also available to buy by the general public in most garden centres and supermarkets.

Over the last few decades many pesticides have been and gone. Despite claims of being a magic fix for farmers, without any side-effects, each pesticide is eventually shown to have detrimental effects to our health or the environment and subsequently banned or replaced with another.

As stated in a report to the Human Rights Council by the Special Rapporteur on the right to food.

Pesticides do not just harm the organisms that they are designed to control. They also have a major impact on non-target organisms, including people.

The World Health Organisation (WHO) estimates that over 350,000 people die every year from acute pesticide poisoning. Moreover, this figure does not include deaths from cancer or other chronic diseases caused by pesticide exposure. In addition, the WHO estimates that long-term exposure may result in upwards of 750,000 people suffering from specific chronic defects and cancers each year. This number refers to developing countries alone. Additionally, the Centre for Pesticide Suicide Prevention (CPSP) states that 15-20% of all suicides is by pesticide self-poisoning.

There are many routes of exposure to pesticides. They are in the air we breathe, the water we drink and the food we consume. We can also come into contact with them by being close to areas where they are being used. Rural residents can suffer the effects of agricultural pesticide drift, and people in towns and cities can be exposed as a result of spraying in public spaces, and areas such as streets, pavements and parks.

Read about our Pesticide-Free Towns Campaign

Farmers, farm-workers and their families are one of the groups most frequently exposed and as a result often have higher rates of pesticide-related ill health. Other groups more vulnerable to the harmful effects of pesticides include children, pregnant women, the elderly and the sick.

Pesticides are a drain on developing economies

The United Nations Environment Programme (UNEP) estimates that the cost of illness and injury associated with pesticide use in sub-Saharan Africa will amount to US$90 billion by 2020. This exceeds the total amount of international aid provided to the region for basic health, excluding HIV/Aids.

In addition, unfair trading arrangements and exploitative markets can drive small farmers into debt. For example, pesticides can eat up around 60% of a smallholder cotton farmer’s income in West Africa. And harvests are often too meagre to generate enough cash to pay debts.

“Hazardous pesticides impose substantial costs on governments and have catastrophic impacts on the environment, human health and society as a whole, implicating a number of human rights and putting certain groups at elevated risk of rights abuses .”

As stated in a report to the Human Rights Council by the Special Rapporteur on the right to food. 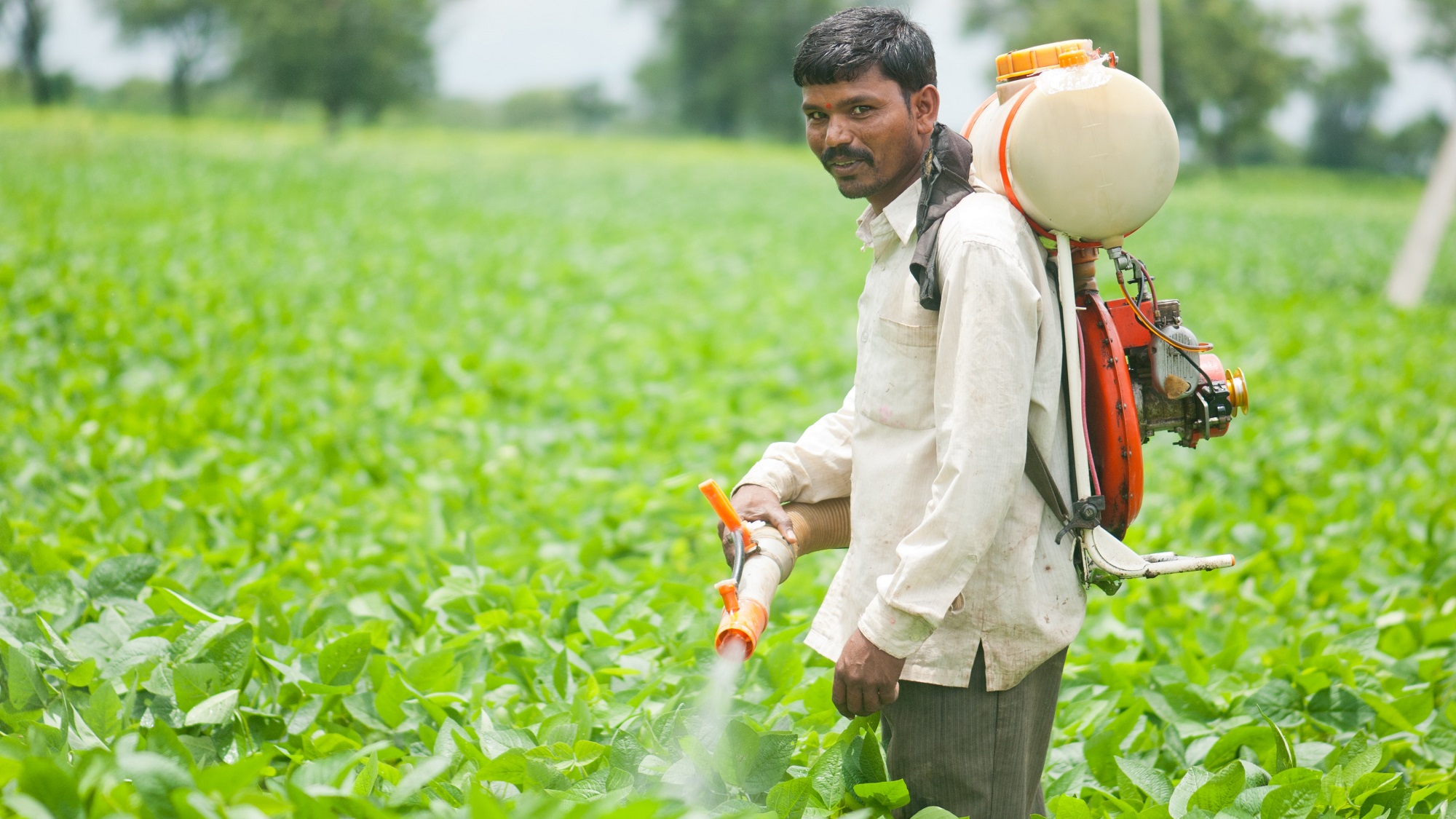 Pesticides are harmful to our wildlife and the environment

A large percentage of pesticides reach a destination other than their target. They contaminate the air, soil and water when they run off from fields and pavements, escape storage tanks, are not discarded of properly or are sprayed aerially.

They have been linked to declines in bees and pollinators, beneficial insects, bird, mammals, aquatic animals and non-target plants. In addition, soil microorganism and earthworms are poisoned, leading to soil infertility.

Find out more about the effects of pesticide on our environment 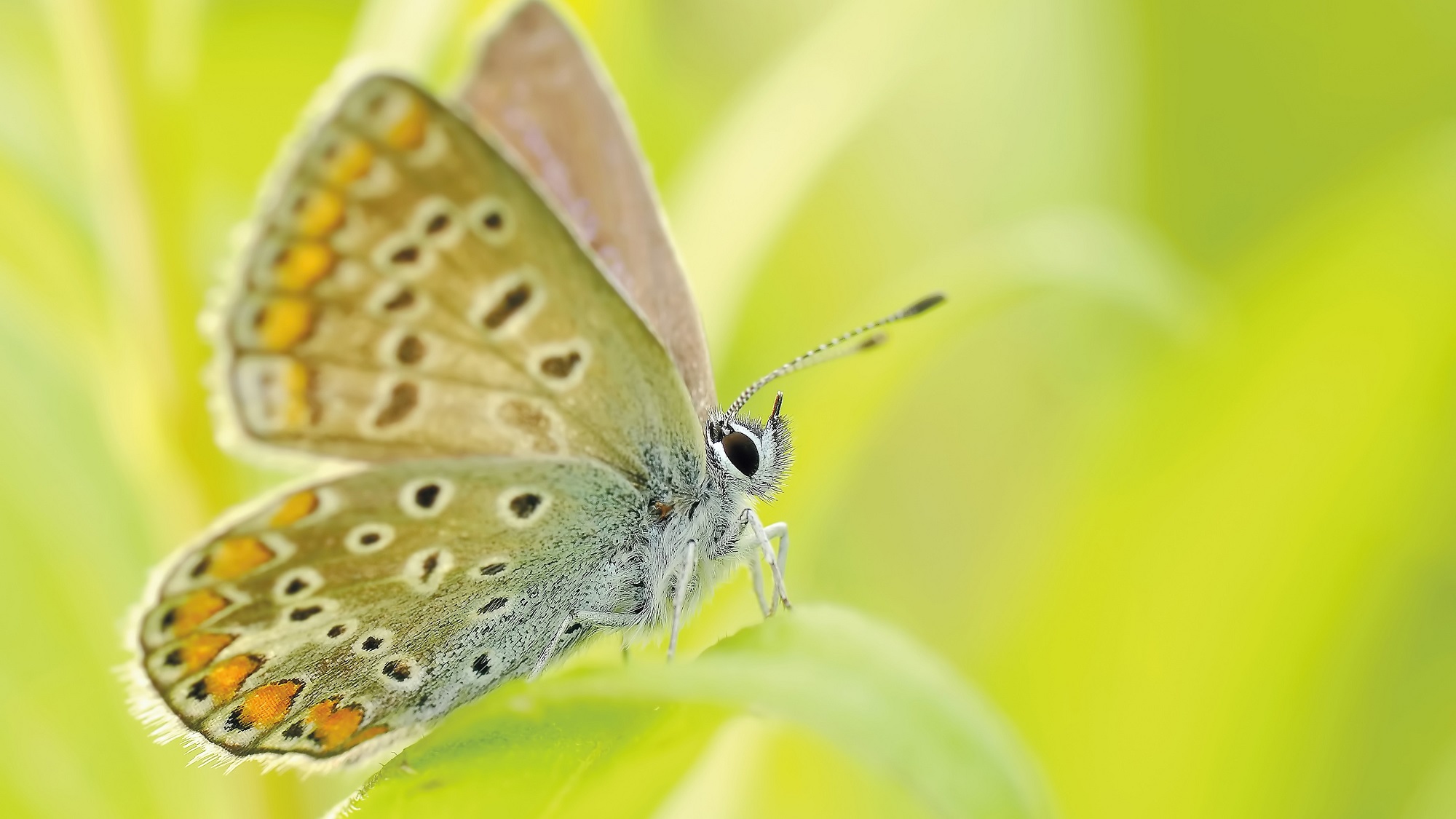 Authorisation and use of products in the UK

Currently, active substances are authorised by the European Commission on behalf of all EU Member States. The UK can then decide whether to allow the approved active substance for use nationally and deems which specific pesticide products are permitted. As with active substances, the testing of products is often only undertaken by their manufacturers. The subsequent toxicity and other data is then provided to regulatory authorities for their assessment. Regulators are reliant upon the information they are provided by the companies that manufacture and profit from the sale of pesticide products. Pesticides are regulated in the UK by the Chemical Regulation Directorate (CRD) which is part of the Health and Safety Executive (HSE).

Find out more about pesticide regulation

Maximum residue levels (MRLs) are set at the EU level for each pesticide and our foods (produced inside or outside of the EU) are monitored by the Pesticides Residues in Foods (PRiF) Committee so that pesticide levels to not exceed these limits. However, little research has been done on the effects of multiple pesticides in our diet.

Find out more about residues in our food 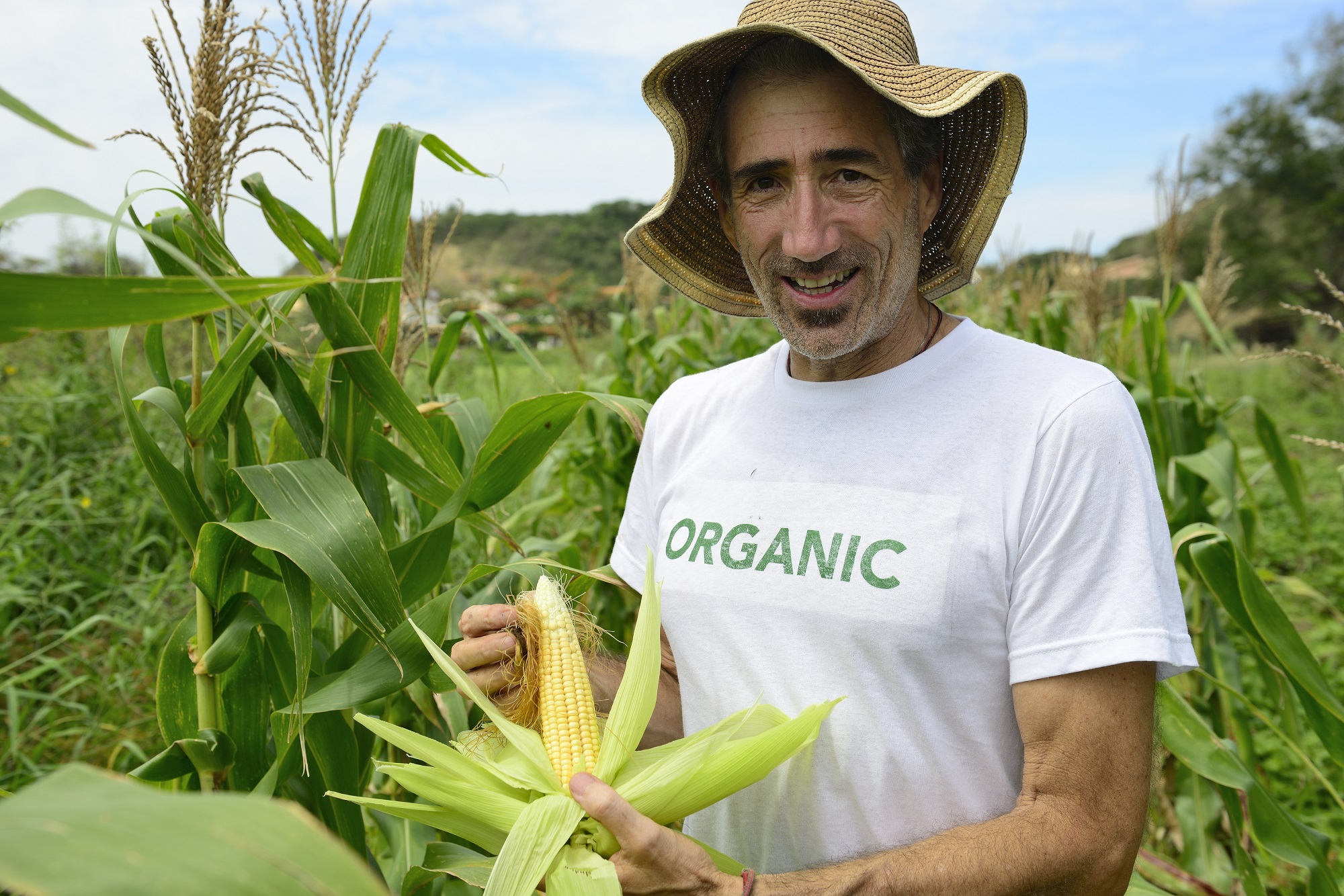 At PAN we believe that there are viable and sustainable alternatives to chemical pesticides. The way forward relies on the development and application of ecological concepts, principles and knowledge to the study, design and management of sustainable agroecosystems. Instead of relying on synthetic pesticides and fertilisers to control pests and provide the nutrients for crop growth, agroecological farming aims to replace chemicals with biology.

Find out more about agroecology

We promote sustainable farming methods and campaign to end the use of pesticides in our towns and cities.

Find out more about our Pesticide-Free Towns campaign