How are pesticides currently regulated in the UK?

Pesticides are currently regulated through a variety of EU and UK laws. In order to ensure these laws are implemented, numerous European and UK bodies and institutions are involved. At the European level the key agencies responsible for governing pesticides include the European Chemicals Agency (ECHA) and the European Food Safety Authority (EFSA), in addition to the European Commission and Parliament which also play a role.

When we leave the EU therefore, we aren’t just facing losing the laws themselves but also the institutions which apply them (this is known as the ‘governance gap’). The UK must make sure to replace the functions of these bodies if we want our pesticide regime to work properly.

There are three main areas of pesticide policy which are regulated:

A range of EU institutions are involved in authorising active substances. Their role is to ensure that the process is carried out transparently and independently so that decisions are based on scientific evidence and protect human health and the environment from harm, while still enabling farmers to access pesticides. The UK does not currently have the capacity to manage its own process for authorising active substances, therefore, Brexit leaves us with a deeply concerning governance gap.

Once an active substance has been authorised it is then up to individual Member States to decide whether to authorise particular pesticide formulations (also known as pesticide products). The UK has always managed this process and this will not change due to Brexit. 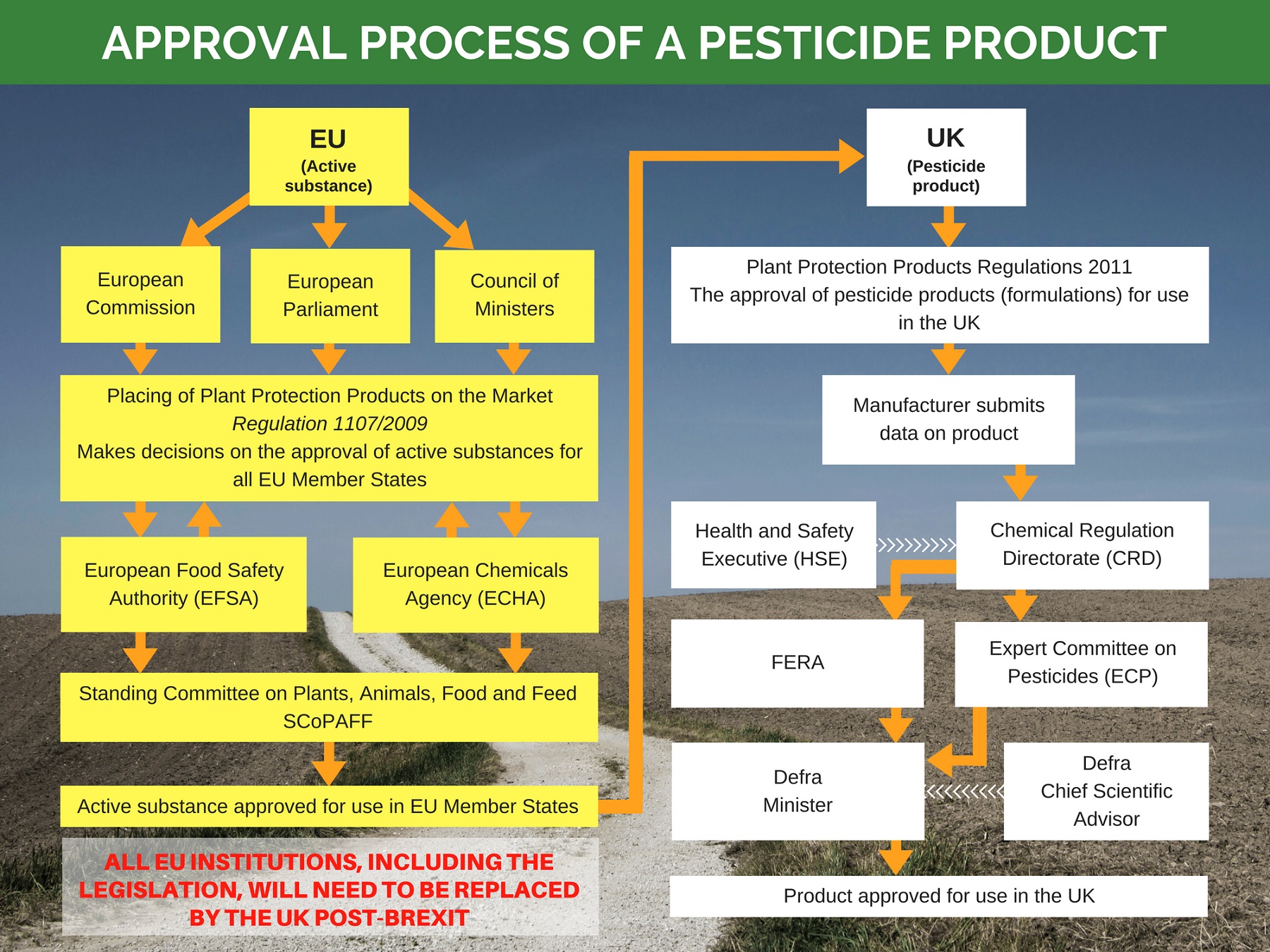 2. How and where pesticides can be used

The EU also sets out rules for how and where pesticides can be used in the UK. The aim of these rules is to ensure that pesticides are used in a sustainable way, reducing risks and impacts on human health and the environment.

This area of pesticide regulation covers issues such as: what training is required for users; how application equipment should be maintained and inspected; measures to protect water and aquatic life from contamination; and how pesticides should be stored and handled.

The UK has already transposed the key EU directive on this area of pesticide policy into national law and was also obliged to create a National Action Plan for the Sustainable Use of Pesticides in 2012. There is also a UK-specific Code of Practice and various other guidance for pesticide users.

As a result Brexit should not result in huge gaps in either legislation or governance.

Currently, the UK has no capacity to take on the mammoth task of setting our own Maximum Residue Levels. Rather than invest the considerable time and money this would require, we may decide to stick to those set by the EU. Another option would be to default to the Maximum Residue Levels set by the Codex Alimentarius which sits under the UN’s Food and Agriculture Organisation. However, these tend to be less stringent than those set by the EU, meaning that UK citizens could soon be facing higher levels of pesticide residues in our food.

Key European law: EU Regulation 396/2005 on Maximum Residue Levels of Pesticides in or on food and feed of plant and animal origin