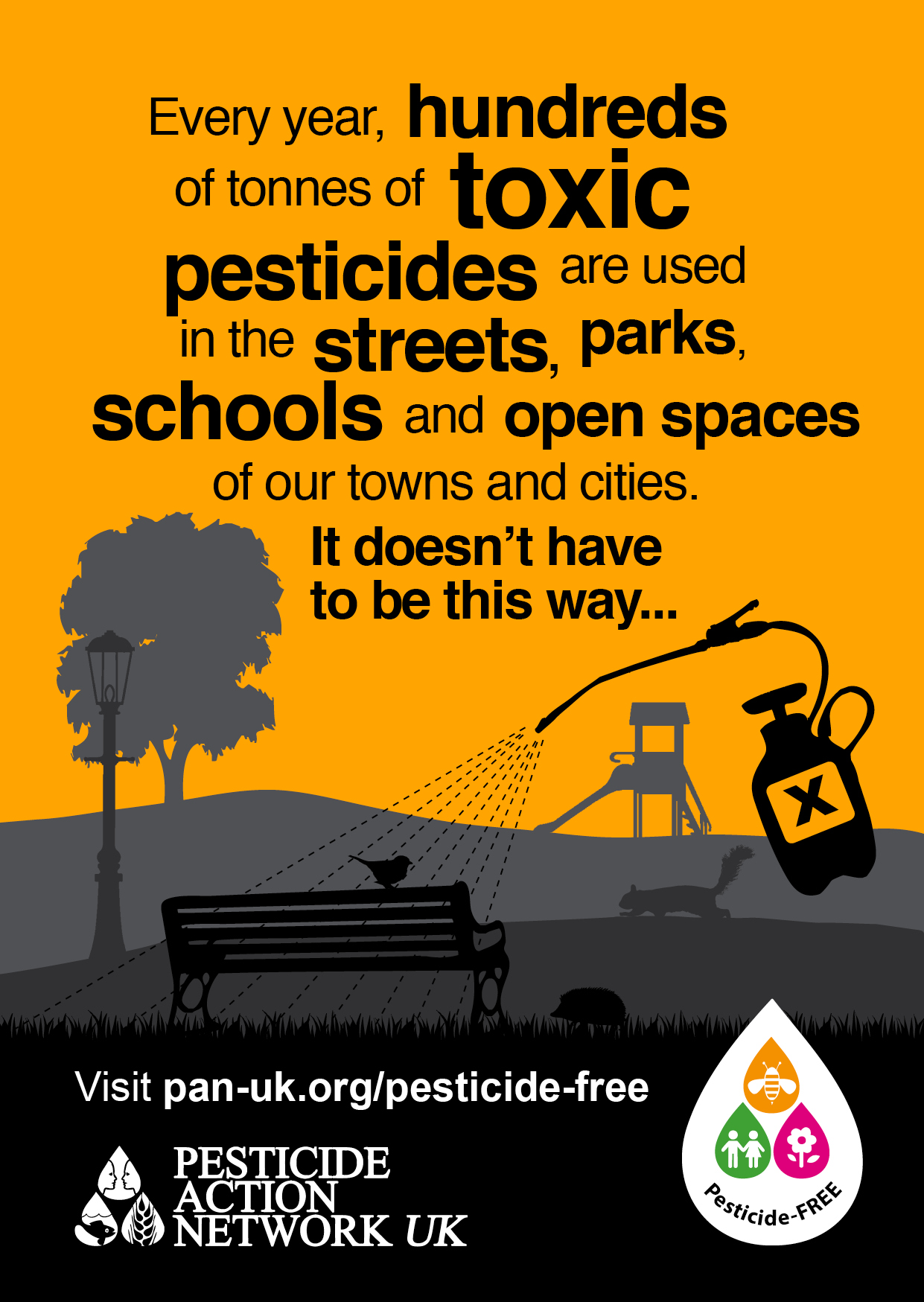 Pesticides aren’t just used in agriculture. A wide range of different pesticides (including insecticides, herbicides, fungicides and rodenticides) are used in our towns and cities. In fact, other than residues in food, the most common way for the majority of people in the UK to be exposed to pesticides is through spending time in urban, public areas.

Local councils are the main users, spraying pesticides in parks, playgrounds and other green spaces, road verges, cemeteries, pavements and around council houses. However, there are also many others that use pesticides including university campuses, car parks, hospitals, private housing developments, shopping centres and schools.

In most UK towns and cities it is currently impossible to avoid exposure to pesticides. However, a growing number of places around the world have already gone pesticide-free and are proving that it can be done. Urban pesticides are unnecessary and should be banned immediately in order to protect human health and the environment.

You can make change happen.

What are the hazards to our health and the environment?

In a UK-wide survey (dated 26th April 2018), there were a reported 38 different types of pesticide used in the towns and cities of the UK. The majority of these pesticides are herbicides, some of which are classified as probable or possible carcinogens, but the list also includes fungicides, insecticides and growth regulators. Every day we are exposed to a cocktail of chemicals and nobody knows what impact this consistent low level exposure to a mixture of chemicals is having on us.

Glyphosate is the most widely used herbicide in the world. A study shows that councils and their contractors used over 61,000 kilograms of this chemical to control weeds in our urban spaces in 2016. It has been classified at a ‘probable human carcinogen’ by the International Agency for Research on Cancer (IARC).

The effects of pesticides on our heath →

Pesticides are also having devastating effects on our environment and urban biodiversity. When used on hard surfaces such as pavements and paths they tend to run off, contaminating water courses and harming aquatic wildlife in the process. Herbicides turn parks into ‘green deserts’ where only grass grows. They kill plants which are relied upon by birds, insects and other wildlife. Many of the pesticides used are also highly persistent meaning that they stay around in the soil long into the future.

Due to habitat loss and the large quantities of pesticides used in UK agriculture, wildlife is increasingly seeking refuge in our towns and cities. However, the overuse of pesticides is destroying many of the areas where they can forage for food and contaminating the natural resources they depend upon. A 2017 study revealed a 76% decline in flying insects since 1990 and pollinators, such as bees, are particularly struggling.

The effects of pesticides on our environment →

What are the alternatives to using pesticides in our urban spaces?

Raising public awareness is absolutely key to the success of going pesticide-free. Councils and other land managers must ensure they communicate their plan of action, and their reasons for change, to the public. If local residents understand the health and environmental benefits they are much more likely to support the initiative and accept a higher level of ‘weediness’. It is also possible to get local volunteers to help with jobs such as hand weeding.

PAN UK is keen to work with councils and other land managers to devise bespoke strategies for ending pesticide use tailored to fit their local context.

You can make change happen.