The UK’s impending departure from the European Union presents a major opportunity to reduce overall pesticide use. In fact, the UK government has already laid out its stated intention to reduce pesticide use in its 25 Year Environment Plan. However, there is currently very little detail on how such a reduction might be achieved.

Setting clearly defined targets is recognised as a useful policy tool for establishing aspirations and driving action. National targets have already been laid down in other policy areas to help tackle important environmental issues such as carbon emissions and landfill waste. A national target is particularly appropriate in the field of UK pesticide policy because it is currently set using a siloed approach which fails to take into account, let alone mitigate, the cumulative impacts of the various pesticides that are being deployed. The introduction of a pesticide reduction target would provide an over-arching framework to coordinate the work of multiple stakeholders and ensure that the various measures complement each other and contribute to this common goal.

It’s crucial that any reduction target is accompanied by a significant increase in support for UK farmers to adopt non-chemical pest control methods. This support must include incentives that reward their efforts in reducing pesticide use, for example through subsidies delivered via the UK’s new Environmental Land Management Scheme, as well as state funded research into Integrated Pest Management (IPM) and access to agronomic advice independent of the pesticide industry.

A pesticide reduction target is not a new or novel policy recommendation. A range of countries (including nine EU Member States) already have reduction targets, introduced in response to widespread public concern over the health and environmental impacts of pesticides.

A variety of opportunities exist for including a pesticide reduction target into the UK’s post-Brexit policy framework, most notably within the impending Agriculture or Environment Bills or updated National Action Plan.

This briefing argues for the adoption of a pesticide reduction target by the UK government and includes: 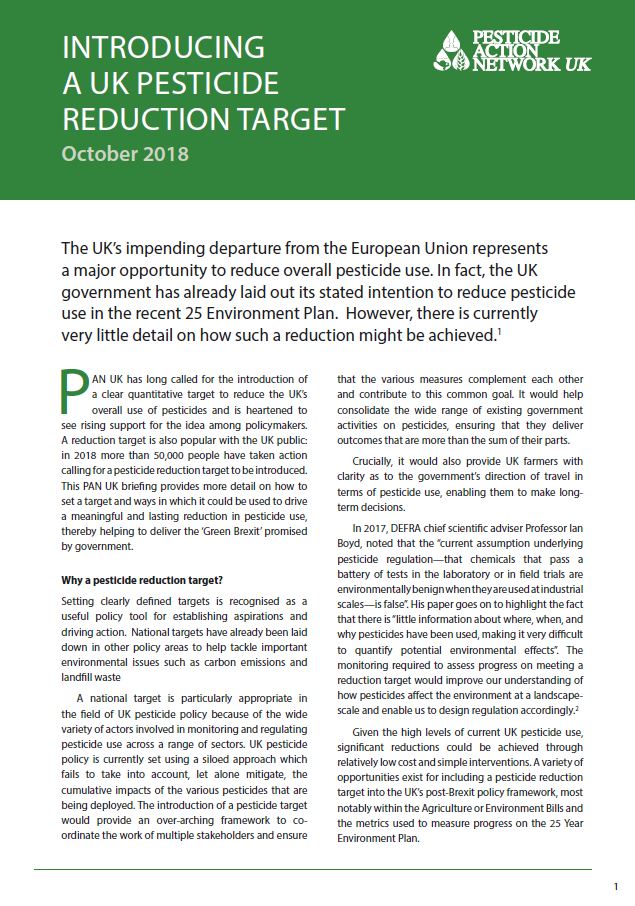