The truth about pesticide use in the UK

Claims that pesticide use in the UK is reducing are often put forward by those in the pro-pesticide camp in order to argue that there is no need for stricter regulation. But does this claim really hold up under close scrutiny?

The claims made about pesticide use halving since 1990 are based solely on the weight of pesticides being used – and in that sense they are correct. However, PAN UK has analysed the official UK data on pesticide use and we have found that, in many cases, and by most internationally accepted measures, pesticide use is rising as is our exposure to their harmful impacts.

Since 1990, the exposure of the UK public and environment to pesticides has increased in the following ways:

And all the while pesticides are having serious harmful effects on our environment – farmland bird species continue to decline, bees and pollinators are being poisoned, our water is being contaminated and pesticide residues are present in the food we eat.

Weight is a meaningless metric for measuring the use of pesticides as our research clearly shows. PAN UK is calling for a more robust system of monitoring pesticide use coupled with a quantitative target for the reduction of pesticide use throughout the UK.

The table below highlights just some of our findings and the full briefing can be downloaded here.

Increases in area treated (shown by type of pesticide): 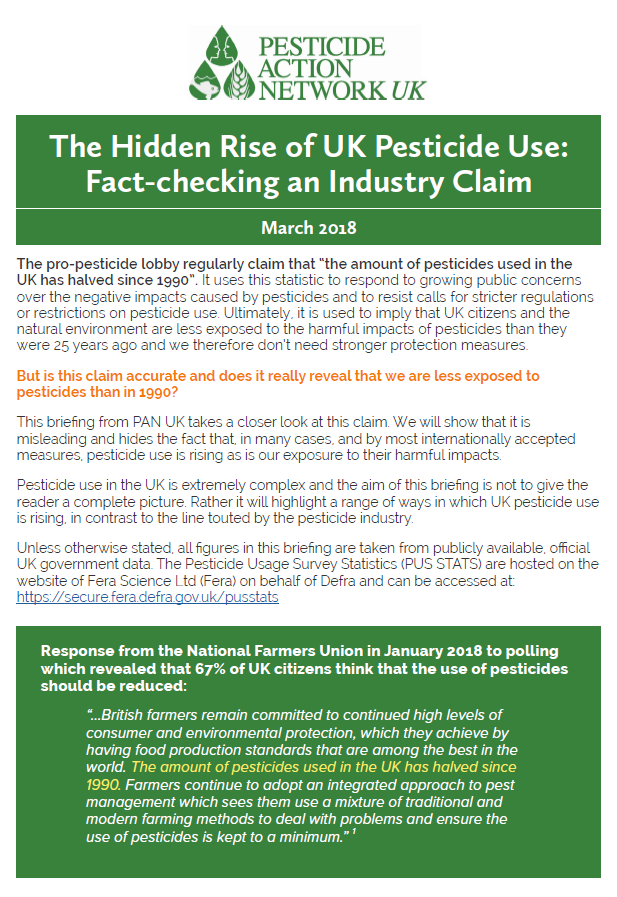