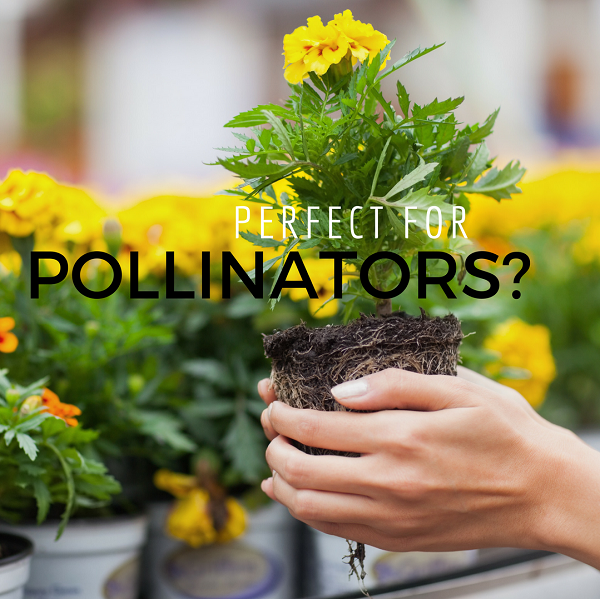 Take a walk around your local garden centre and you will see a mouth-watering range of gorgeous plants on display. You might note that some are specifically labelled as pollinator or bee-friendly, with a picture of a cartoon bumblebee on the label. The Royal Horticultural Society (RHS) provide a “Perfect for Pollinators” logo which can be added to the label of any of the long list of garden plants that they judge to be good for pollinators. If you like hearing the buzz of bees in your garden, and want to do your bit to help our wildlife, you might well be tempted. Indeed, I have often spent a small fortune myself on potted plants when I only went to the garden centre to buy a pack of vegetable seeds. The big DIY and supermarket chains are similar – near their main entrances you will see a range of colourful plants in plastic pots and trays, some of them labelled as bee-friendly.

If, like me, you’ve ever succumbed to the temptation to buy these plants, you may be somewhat concerned by the results of our latest research. Here, at Sussex University, we have been busy screening the leaves, pollen and nectar of these plants to see if they contain pesticides. We bought flowering plants from a range of major outlets; Wyevale (the biggest garden centre chain in the UK) and also Aldi, B&Q and Homebase. We deliberately bought plants that are known to be attractive to bees and butterflies; most of them had a bee-friendly logo, often the RHS one.

We found that most of these plants contained a cocktail of pesticides, usually a mixture of fungicides and insecticides. I wish I could say that I was surprised by the results, but sadly I wasn’t, for this mirrors similar studies performed in other countries. Only two out of 29 plants contained no pesticides. Seventy six percent of them (22/29) contained at least one insecticide, and 38% contained two or more insecticides. One flowering heather plant contained five different insecticides and five different fungicides – a veritable toxic bouquet. Seventy percent of the plants contained neonicotinoids (insecticides that are notorious for their harmful effects on bees), commonly including the ones banned for use on flowering crops by the EU (for the technically minded: 38% contained imidacloprid, 14% contained thiamethoxam and one contained clothianidin)[1] . Enough detail; you get the picture. Plants sold as ‘bee-friendly’ plants are usually stuffed full of pesticides.

Just before our results went public, B&Q (who knew that our study was appearing imminently) announced that they were prohibiting their suppliers from using neonicotinoids on their plants from February 2018. This is of course a great step forwards; well done B&Q, next time I need some screws or shelving I will be heading your way, and I hope others do likewise. Once our results were out Aldi declared that they stopped using neonicotinoids in October 2016 (we bought the plants we tested from them in July 2016).

Homebase and Wyevale have so far declined to make any public comment, despite high profile articles about the work in the Daily Mail and Independent. The Horticultural Trades Association (HTA), which represents the gardening industry, has been less than positive. Firstly, they claim that the three neonicotinoids banned by the EU on flowering crops are not used in horticulture (which would seem to simply be untrue). They then go on to say the “industry works closely with government bodies and other stakeholders to uphold high standards of environmental management”. They say that the concentrations of pesticides we found are at “low levels”, that we only sampled from “a very restricted area of the country”, and they suggest that the presence of clothianidin in one plant shows that our samples were contaminated, since this product has never been approved for use on ornamentals. In other words, instead of engaging positively, they try to undermine and play down our work.

Let’s have a closer look at their criticisms. Firstly, the concentration of the pesticide is of course important. Modern analytical techniques are very sensitive and tiny concentrations can be detected. Perhaps the concentrations we detected are all too low to do any actual harm? For neonicotinoids, the concentrations typically found in the nectar and pollen of treated crops, such as oilseed rape, are in the range 1-10 parts per billion (ppb). Exposure to such concentrations has been found to impair bee navigation, reduce egg laying and learning, and suppress the immune system. In a study with bumblebee nests we found that giving them pollen with 6ppb of neonicotinoid reduced nest growth and resulted in an 85% drop in the number of new queens produced[2]. In the ornamental flowers, we found imidacloprid at up to a maximum concentration of 29ppb, clothianidin at 13ppb and thiamethoxam at 119ppb. In other words, concentrations far higher than those known to harm bees. The claim that we only sampled from a “very restricted area” is pretty absurd. It is true, we sampled from stores near Brighton, but these are huge chains with a national/international supply network. Are HTA really suggesting the problem is peculiar to East Sussex? On the presence of clothianidin and the suggestion that our samples were contaminated, HTA need to learn a bit more about pesticides. As well as being used as a pesticide in its own right, clothianidin is a breakdown product of the closely related chemical thiamethoxam. The Ageratum plant containing the clothianidin also contained much higher levels of thiamethoxam, presumably the product with which it had been treated. So, not evidence of contamination at all.

I would argue that, by quibbling over details and focussing on neonicotinoids, HTA are missing the bigger picture, as indeed are B&Q and Aldi. Neonicotinoids are undoubtedly bad for bees, but what about all the other chemicals? If I buy a plant to feed to bees I don’t want it to have been drenched with a pyrethroid or organophosphate insecticide either. Both are highly poisonous to bees (and organophosphates are exceedingly toxic to people too). Even some of the fungicides have been found to harm bees[3]. If I’m buying plants to encourage wildlife, I don’t want the lingering worry that I might be accidentally poisoning my bees, hoverflies and butterflies. I don’t use any pesticides in my garden – I simply don’t need them. I don’t want to bring them in accidentally.

It is a shame that the horticulture industry seems largely unwilling to engage over this issue. It is perhaps not surprising, since their track record is not great. They’ve been continuing to promote and use peat-based composts for many decades, despite the ready availability of perfectly good alternatives (in case you didn’t know, peat extraction does terrible damage to peat bogs, exacerbates flooding and ultimately releases large amounts of carbon dioxide into the atmosphere). With birds, bees and butterflies all in rapid decline (2016 was the worst year ever for British butterflies), we all need to be willing to admit our mistakes and change our ways. HTA and the big garden chains such as Wyevale could really help to make a difference if they wanted to. I’d be very happy to help if they would like some advice (Wyevale, how about launching a new organic range of genuinely bee-friendly plants?).

Until the gardening industry gets its act together, I’d suggest the following. If you must buy plants, buy from an organic nursery, or failing that from B&Q or Aldi. Better still grow them from seeds, or if you haven’t the patience, plant swap with your friends and neighbours (if anyone wants some comfrey roots and lives near East Sussex I’d be happy to give you some, pesticide free, it is a fabulous plant for bees). We really can make our gardens into havens for wildlife, but not by driving to the garden centre to buy pesticide-laced plants grown in peat-based compost inside disposable plastic pots.

Dave is a Professor of Biology at Sussex University, a world leading researcher, ecologist and conservationist. He founded the Bumblebee Conservation Trust in 2006, is a trustee of PAN UK, and is the best selling author of ‘A Sting in the Tail‘ and ‘A Buzz in the Meadow‘.