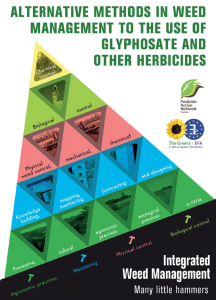 Last December, following glyphosate’s re-authorisation, six ministers from France, Belgium, Luxembourg, Slovenia, Malta and Greece wrote a letter to the European Commission asking them to “prepare the exit plan for glyphosate by supporting farmers to do so”.1 As France speeds up its efforts towards a phase-out, other like-minded Member States seem eager to discuss next steps and share approaches in the exit plan for glyphosate.

This PAN report shows that there is already knowledge and tools available to replace widespread herbicide use. It gives an overview of some of the ecological and mechanical techniques that can be used in combination, forming a toolkit of “many little hammers” to manage weeds, rather than relying on a “chemical wrecking ball”. This means moving from a logic of complete extermination, with associated biodiversity loss, to rather managing weeds in line with the EU Directive on Sustainable use of Pesticides.

“The transition towards lower impact systems and less reliance on glyphosate involves not only replacing glyphosate-based herbicides by using mechanical means or other less harmful herbicides, but also discovering or re-discovering organic farming cycles and techniques, learning to work with nature again, following the “many little hammers” approach – as illustrated by the Integrated Weed Management triangle presented on the cover page of the report!” Henriette Christensen, Senior Policy Advisor, PAN Europe.