Is FAO in the pocket of the pesticide industry?

A few weeks ago, Qu Dongyu, the Director General of the UN Food and Agriculture Organization (FAO) announced his intention to develop a new partnership with CropLife (the pesticides industry trade body) to transform agri-food systems. This marks a major departure for FAO, which has carefully guarded its impartiality and resisted the industry’s overtures in the past.

It seems that FAO is hoping that the deal will provide capital and new technologies for its work, but there is little objective scientific evidence that CropLife’s pesticides help farmers or contribute to food security. On the other hand, there is plenty of – and growing­ – evidence that these chemicals are having a devastating impact on biodiversity and human health.

If this partnership goes ahead, it will give CropLife’s companies greater access to new markets in Low- and Middle-Income Countries (LMICs). Beth Bechdol, the FAO Deputy Director who negotiated the deal, said it would open “new channels of communication for private sector partners with FAO’s country offices and national governments”. In effect, this new deal would turn FAO into the marketing arm of the pesticide industry. 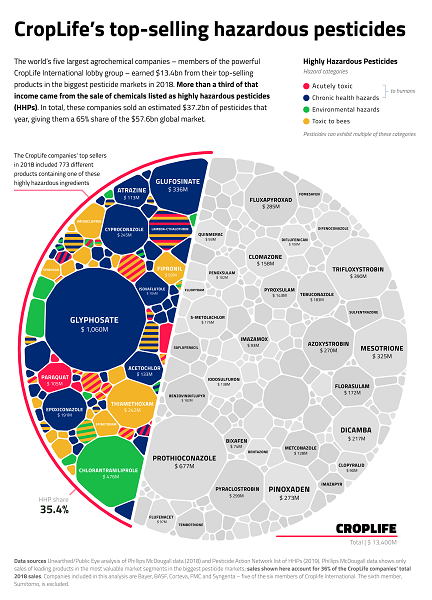 CropLife often tries to present itself as a “responsible” part of the global pesticide industry and points to the “generics” sector – which produces older, off-patent chemicals – as the source of most global pesticide problems. But the reality is that over a third of the products sold by CropLife companies are classed as Highly Hazardous Pesticides (HHPs) – these are the pesticides that are behind most poisoning cases and environmental destruction. Syngenta, for example, continues to sell paraquat even though this has poisoned by thousands of people worldwide.

A number of FAO’s initiatives to minimise external inputs and conserve genetic diversity are a direct threat to CropLife’s business. There is a real concern that the proposed partnership could lead to FAO backing away from its commitments to phase out HHPs and promote effective agroecological alternatives to CropLife’s most dangerous products.

It is clear why CropLife is keen on the partnership – not only will it help sell its products, but it will also lend this toxic sector a veneer of respectability. Nearly four years ago, Hilal Elver and Baskut Tuncak, the UN Special Rapporteurs on the Right to Food and Toxics, highlighted unethical practices used by the pesticide industry – including CropLife members ­– such as aggressive marketing tactics, huge sums spent to influence policymakers and undermining scientific evidence. They specifically warned that “…pesticide manufacturers cultivate strategic “public-private” partnerships that call into question their culpability or help bolster the companies’ credibility”. That warning was prescient, but sadly it looks like the new FAO leadership has not paid attention and is rushing headlong into a deal that will damage FAO’s reputation and tie it to an industry that has repeatedly undermined its fundamental aims.

The bottom line is that CropLife is a collection of private companies whose primary goal is to maximise profits and sell more of their products regardless of whether it is in the best interest of the farmer or of the environment. FAO on the other hand has a mandate to act independently to promote safe and sustainable forms of agriculture that work for farmers and conserves their environments. There is an inherent conflict between these two priorities and this partnership should be abandoned.

600 civil society organisations and academics call on the FAO to end this alliance with CropLife. Read the full letter here. 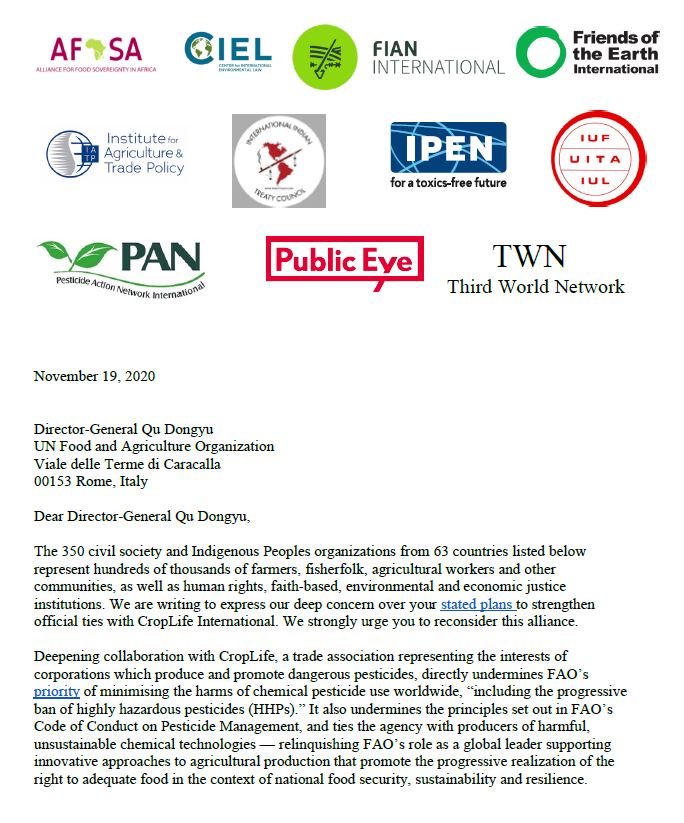