Non-agricultural pesticides in the UK

On 26th April, the Health and Safety Executive (HSE) released the results of its latest survey into pesticides used in the amenity sector in the UK. This is the second such survey and it looks at use reported in 2016 – presenting some interesting and perhaps also worrying information.

The survey covers pesticides used outside of agriculture, but does not include those used for home and garden use by the general public. Over 1,100 companies and organisations in the amenity sector were contacted and asked to respond to the survey. These included contractors, golf courses, local authorities, water companies and others. Response rate was just 9% with a further number of organisations responding online. The response rate from local authorities was particularly poor with only 24 in total. Given there are over 400 local authorities in the UK, all of which will be using pesticides in some form, this is disappointing. On the other hand responses from golf courses far outstripped those of the others providing 119 of the total. In all, the number of responders across the board were 209. 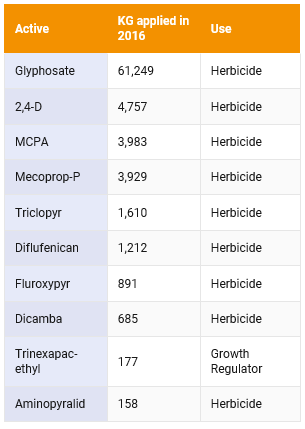 Whilst this has managed to provide some useful information, it falls short in giving a complete picture of pesticide use in the amenity sector. It must be assumed that the quantities of active substances reported as being used are under-reported and that there is in fact a greater use of pesticides than the survey would indicate.

Unsurprisingly, the survey shows that glyphosate is the most widely used active substance in the amenity sector. By weight, glyphosate represented 77% of all active substances used by the amenity sector in 2016. In terms of treated area, herbicide use accounted for 98.8% of the total with fungicides, insecticides, growth regulators and biological control agents accounting for the rest of the usage.

Some European countries are stopping – or dramatically reducing – the use of herbicides in amenity sectors. They have begun to effectively implement non-chemical control methods. This is an area where the UK Government should provide clear guidance/legislation aimed specifically at reducing and ending the use of pesticides, particularly in areas frequented by the public. Voluntary approaches do not work to reduce pesticides and the industry will not regulate itself without strong legislative measures that will help to drive change.

Whilst this survey is welcome in terms of adding to our knowledge on pesticide use, we must point out its shortcomings. As there have only been two reports covering the single years 2012 and 2016, it is not possible to look at changes in pesticide use across the sector in any meaningful sense.

On the whole the survey is an interesting snapshot of a small section of the amenity sector at a specific point in time. But, if we are to be able to properly analyse pesticide use in our urban areas to drive key decision-making about non-agricultural pesticide use then we need more robust data provided more frequently.

In terms of this report and the amenity sector as a whole PAN UK would like to see;

PAN UK has been running a Pesticide-Free Towns campaign for the last three years, aimed at reducing – and ultimately ending – the use of amenity pesticides, particularly by local authorities in the UK. There is a clear appetite for change and there have been some notable leaders in going pesticide-free such as Glastonbury and Hammersmith & Fulham.

We are now working with a number of London boroughs and as part of our campaign we have produced a range of materials and held workshops to support councillors and council officers in going pesticide-free.

For more information on our Pesticide-Free Towns campaign and to see videos from our recent workshop please visit: www.pan-uk.org/pesticide-free