John Wilson is a new campaigner who has recently launched a Pesticide-Free Towns campaign in Newcastle. He shares his motivations and campaign progression below:

I have been lobbying Newcastle Council to stop using glyphosate-based weed killer for over 15 years. I did this first as an individual and now, for the last 5 years, as part of a small local nature/environmental group – Newcastle Green Spaces Initiative. 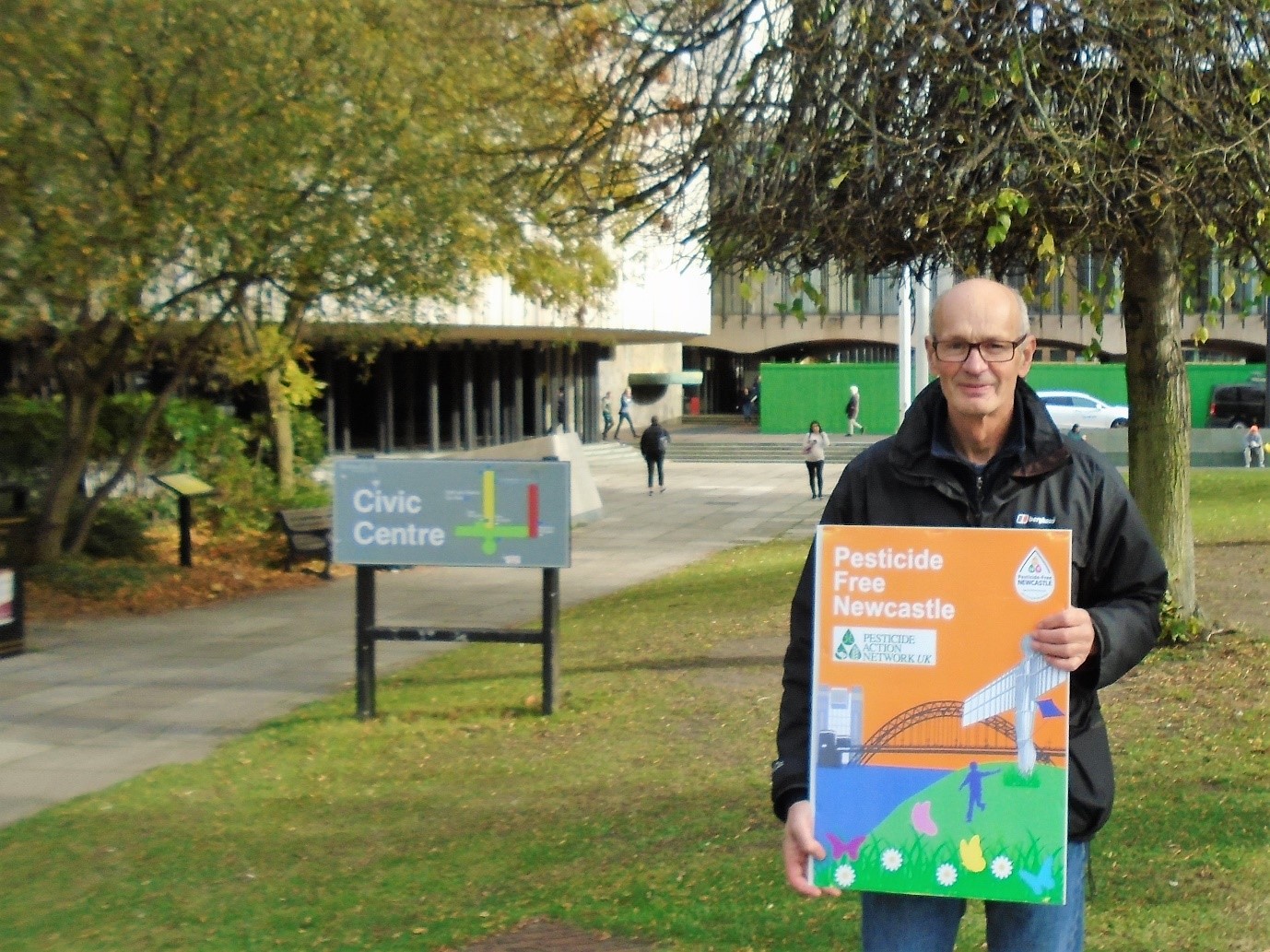 Our group is committed to enhancing urban areas in ways that benefit insects such as butterflies, bees and other pollinators. The council’s use of glyphosate is very harmful to invertebrates. If it is sprayed directly on to them they will certainly be killed. However, after spraying dry residue remains on the plant. This is also harmful to insects that feed on, or even rest on, the plant.

Another very harmful effect of glyphosate is on aquatic life. It is known that amphibians are harmed by very small amounts of glyphosate in the water which they inhabit. Spray vehicles are particularly bad in this respect. Much of the spray they apply ends up on a hard surface such as pavement. The next time it rains this glyphosate, which is very soluble in water, will be washed into drains and from there reach streams and ponds. The Health and Safety Executive knows this and prohibits spraying glyphosate on most hard surfaces, but appears to make no effort to enforce this regulation. Unfortunately, there is also an exception for spraying curbs – which is deplorable. The evidence that glyphosate-based herbicides are extremely harmful in numerous ways has accumulated over the years. It should now be blindingly obvious that the public, their pets and nature should not be exposed to these and other pesticides when perfectly safe alternatives such as Foamstream are available.

I feel very strongly on this issue for a number of reasons. I spend a lot of time walking around my neighbourhood and other parts of Newcastle. I am interested in botany so am very aware of what is growing and greatly value the trees, bushes and plants that line my local streets. I detest the sight of yellow/orange sprayed areas along paths and curbs, around street signs and posts, along fences and around trees. No sooner have the visual effects of one spray application worn off than the process is repeated. 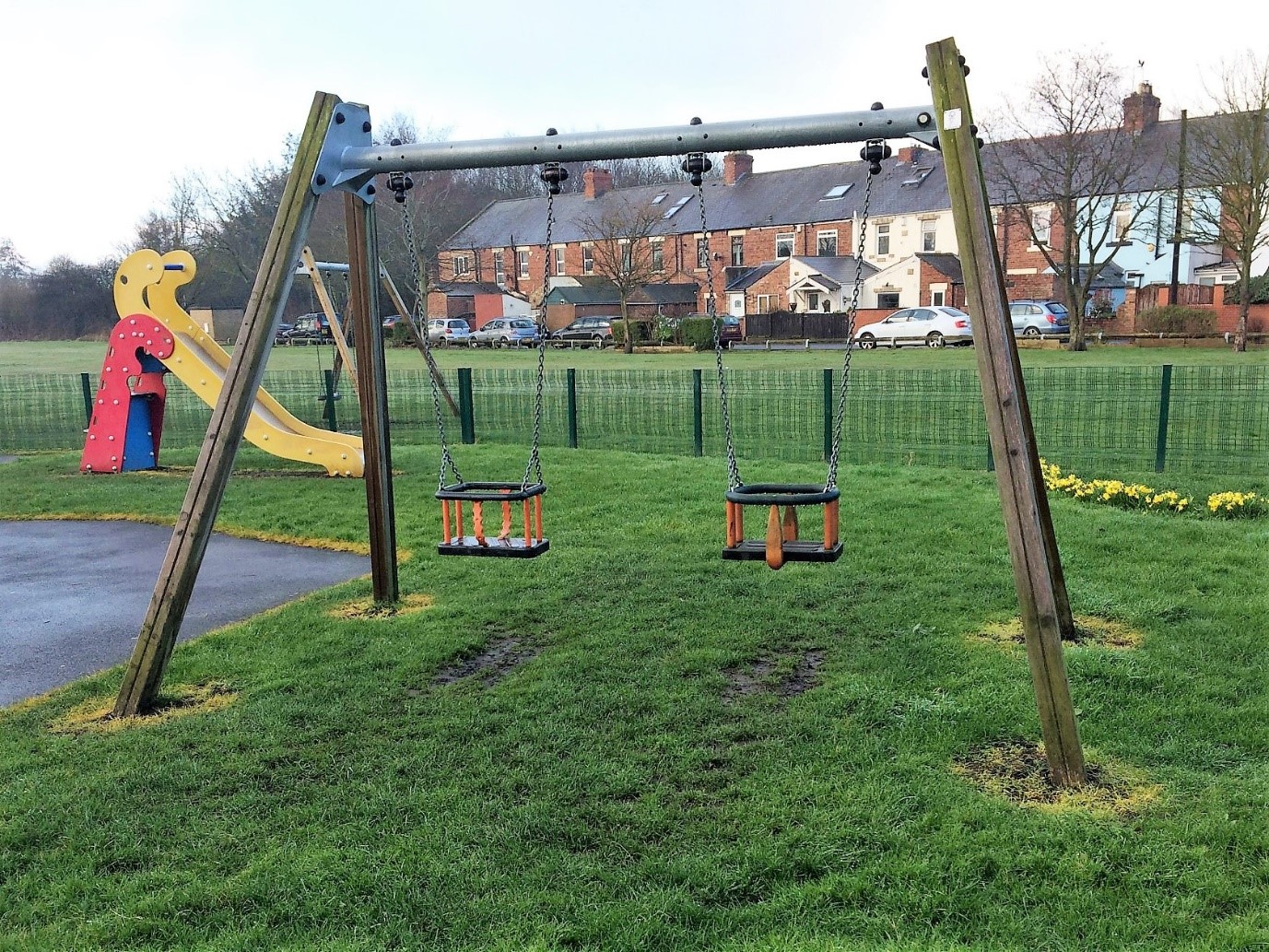 There are two aspects that I feel particularly strongly about. We do not know the areas that have been sprayed until the grass starts to die, perhaps ten days after spraying has taken place. This means that dogs are sniffing or perhaps eating grass that is covered in dry glyphosate residue. This will give them diarrhoea and make them vomit. They may get even more serious diseases from ingesting it. Pedestrians will inevitably tread on sprayed vegetation and take it on their shoes into their home. This will expose children to these chemicals. Children do not have the same capacity to detoxify harmful chemicals as adults.

We had a hearing in front of the council’s Scrutiny Committee in 2016. The council official claimed, erroneously, that to change to using non-chemical methods of weed control would cost six to ten times as much. Our plea for the council to stop using glyphosate herbicides was rejected.

Pesticide-Free Newcastle launched with a public event on the 20th of October, where the issues of pesticides was introduced and discussed. This has been followed by the setting up of a new FB page and continuing public outreach events to raise awareness. 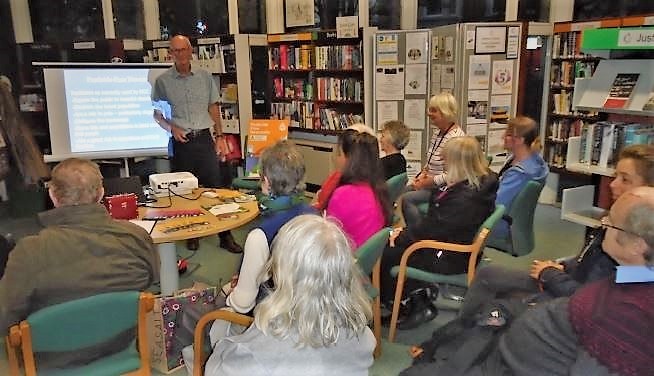 I spoke to the Head Teacher of the primary school near to where I live about their use of glyphosate on the school grounds. She said that I could explain the issue to the school council which is composed of two children from each year group. They discussed what I told them, agreed with it and made a presentation to the school governors. There is now a ban on using pesticides on the school grounds and the children do the extra weeding themselves.

I consider it to be absolutely shameful that council employees are allowed to spray glyphosate using a backpack, wearing totally inadequate protective clothing. They should wear a disposable coverall suit, rubber boots and rubber gloves. Instead, they wear normal work clothes and leather boots and gloves – these are not impermeable. Not only are they at risk, but their families are exposed when they go home with glyphosate residue on their skin and clothes. I have drawn this to the attention of the council numerous times – to no avail. There should be a ban on its use everywhere in the UK – like the one in France.

PAN UK supports grassroots Pesticide-Free Towns campaigns all over the country, helping local people to get councils to reduce, and eventually stop, the use of toxic pesticides in the management of our streets, parks and public green spaces. For more information about how to make your region pesticide-free, please visit our Pesticide-Free Towns page.