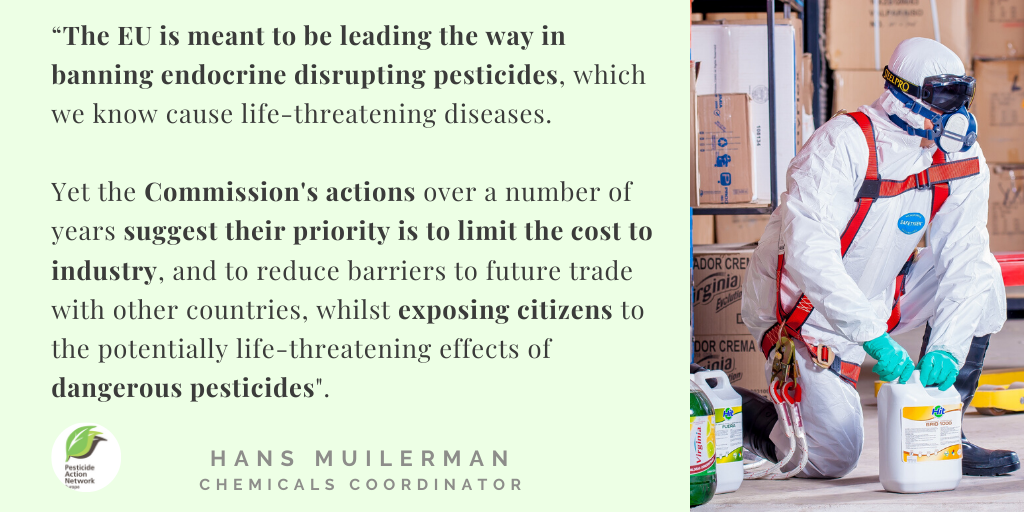 A new report from Pesticide Action Network Europe (PAN Europe) has found that EU officials have approved the use of a number of pesticides (typically giving them a 10-year license) without testing their impact on the human hormonal system.

The EU has approved over 100 pesticides since June 2011. PAN Europe has analysed the testing requirements on 33 of these pesticides and found that 31 were granted a license without any scientific test to check if they caused harm to the human endocrine (hormonal) system. Since 2009, the EU has been the only market in the world that bans pesticides that cause endocrine disruption. These chemicals (so called EDCs), which interfere with the body’s hormonal functions, can cause a wide range of diseases including breast cancer, prostate cancer, and diabetes. They can have serious developmental effects on children’s nervous systems with research showing that humans are particularly sensitive to EDCs during early life stages, making pregnant women, infants and children most vulnerable.

In 2012, the OECD agreed a set of scientific tests which the EU should use as part of the approval process. Furthermore, in June 2018, the EU adopted new guidelines that explicitly set out all the information needed in order for the Commission to reach a judgement on whether a pesticide is an endocrine disruptor, or if it is safe to use. PAN Europe has found that in the vast majority of cases it reviewed, the Commission ignored these rules. Instead of testing pesticides, the Commission simply asked manufacturers to provide “information” about their product. In 12 of the cases reviewed, this information was to be submitted only after approval was granted. Even more worrying, in 10 of these cases, the manufacturers did not even bother to submit the information required, let alone EDC-specific tests. Yet their pesticide was still approved for use in the EU.

These findings provide further evidence of a concerted effort led by the Commission’s DG SANTE, Secretariat-General and certain Member States to continue allowing harmful pesticides to be used in the EU. As early as 2013, the Secretariat-General removed DG ENV from its role setting the criteria for identifying endocrine disrupting pesticides, replacing it with the industry-friendly DG SANTE. In May 2019, The European Court of Justice ordered the release of internal documents that showed how outnumbered research department officials were overruled by agriculture and industry officials who succeeded in watering down the testing criteria for endocrine disrupting pesticides.

During this time, the Commission continued its fight to redefine the criteria for approving pesticides and established a much higher requirement for health officials to prove that a pesticide caused endocrine disruption. They even included non-scientific factors, such as a consideration of farming profitability.

This report by PAN Europe suggests that the Commission is not properly implementing its own rules and guidelines when deciding whether pesticides should be approved in the EU.

“The Commission’s actions over a number of years suggest their priority is to limit the cost to industry, and to reduce barriers to future trade with other countries, whilst exposing citizens to the potentially life-threatening effects of dangerous pesticides. The EU is meant to be leading the way in the banning of endocrine disrupting pesticides, which we know cause life threatening diseases. Yet the Commission has consistently tried to weaken regulation of these hormone disrupting pesticides. It is a move that only benefits industry, whilst these harmful chemicals continue to be sprayed on open fields and end up as residue on our food.”