I’ve recently returned from an exciting ten days in Costa Rica, working with our partners at the Regional Institute for Research on Toxic Substances (IRET) at the National University. The aim of my visit was to share findings from our project on Phasing out HHPs in Costa Rica, funded by the UN’s Strategic Approach to International Chemicals Management (SAICM). Team Leader, Fernando Ramírez, and his colleagues, Silvia Luna and Martha Orozco, started the project in 2015 with surveys of pesticide use by small and large scale producers and an analysis of the government’s data on pesticide imports and exports. Despite its green and environment-friendly image, Costa Rica is infamous for having one of the most intensive per hectare uses of pesticide in the world. It also formulates pesticides for sale across Central America, and imports large amounts of chemicals for this. The IRET team found that 79% of all pesticide volumes imported into Costa Rica between 1980 and 2012 qualify as Highly Hazardous Pesticides (HHPs), according to PAN International’s hazard criteria. In 2015, this amounted to over 10,000 tons of HHP active ingredients imported. The table alongside details the most important HHPs and their health or environmental hazards.

But it’s not all doom and gloom – the project has done some excellent work raising awareness about the problems with HHPs, ways to reduce HHP use and on introducing safer alternatives. In coffee, the team ran a trial at two farms to explore options for phasing out HHP fungicides, notably epoxiconazole, for control of coffee rust disease. They tested several alternatives based on traditional mineral mixtures, biofungicides, botanical products and reduced-dose non-HHP fungicides[1]. The results suggest that non-HHP alternatives can deliver good yields in fields with medium and low disease levels. At high disease levels, neither conventional fungicides nor the non-chemical alternatives were able to control this damaging disease, indicating that more work is needed to breed resistant varieties and pay more attention to crop husbandry for healthy coffee groves.

IRET, with PAN UK, organised a successful regional workshop on Phasing out HHPs in Coffee, with participation from growers, co-operatives and technical staff from Guatemala, Honduras and Nicaragua. We heard some inspiring experiences in reducing pesticide use and I was pleased to learn that organic and fairly traded coffee production is now increasing in Costa Rica too. 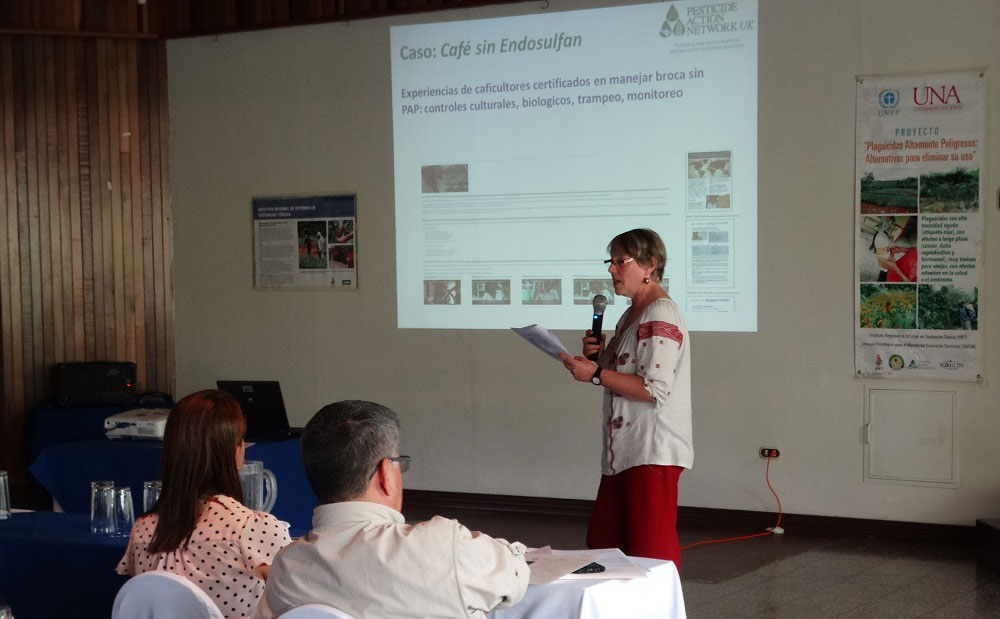 Trials on alternatives to ethoprophos

In pineapple production (one of Costa Rica’s most important export earners and employers), Fernando’s team trialled alternatives to the HHP nematicide ethoprophos for control of root-feeding nematodes, which attack the young plants. Alternatives based on biofungicides and ‘wood vinegar’ distilled from burning woody plant material  seemed as effective as the conventional chemical method, although the research site had only very low nematode levels. Interestingly, pineapple plant weight was significantly lower in plots treated with ethoprophos, suggesting harmful side-effects on the soil organisms needed for growing a healthy crop[2]. The good news is that the non-chemical alternatives are much cheaper than ethoprophos and can be applied without special equipment or extensive training.

At the project workshop on pineapple HHP reduction, collaborator Wilberth Gómez, from the large farm Fertinyc, shared his experiences in exploring ways to reduce agrochemical inputs and how he is now producing biological preparations to grow healthier, more resilient plants. Fertinyc supplies major UK supermarkets via importers, mainly of peeled and cut fruit for ready-to-go fruit salad boxes. Through PAN UK’s liaison with UK retailers and their suppliers, we were able to inform Costa Rican growers about European consumers’ concerns about pesticide use and give our views on how supermarkets can support growers to shift to safer practices. Wilberth’s British company buyers are particularly concerned about the use of paraquat herbicide, diazinon insecticide and nematicides ethoprophos and oxamyl, for reasons of farm worker health and the environment.

Keep an eye on our agroecology and Highly Hazardous Pesticides pages for more updates on this and other PAN UK projects to reduce reliance on HHPs.