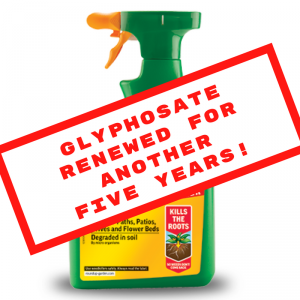 PAN UK is disappointed to report that the controversial weed killer, glyphosate, has been given approval for use in the EU for a further five years. What is even more disappointing is that the new approval comes without any restriction on use by the public, in public spaces or for use as a pre-harvest desiccant.

This is a massive opportunity lost, restrictions and bans would spur on innovative approaches to replacing glyphosate, bringing positive benefits for human health, the environment and UK farmers.

This is a huge rejection of the democratic approach. The European Commission and those Member States that voted in favour of renewal chose to ignore the European Parliament and the 1,320,517 European citizens that signed a petition to ban glyphosate, reform the EU pesticide approval process, and set mandatory targets to reduce pesticide use in the EU.

However, some of the more progressive Member States will be taking action on their own behalf. Most notably, France will be introducing its own restrictions on glyphosate use.

PAN UK will continue to work with our colleagues across the EU to reduce the use of glyphosate and other pesticides that pose risks to human health and the environment.

How did member states vote today?

This morning, a proposal from the European Commission to re-license glyphosate for five years once again failed to gain sufficient support from Member States.

The current authorisation for the world’s most widely-used weedkiller expires on 15th December and the Commission has said it will now take its proposal to the Appeal Committee by the end of November 2017.

More than 1.3 million European citizens have demanded a total ban on glyphosate and the European Parliament recently called for it be phased out completely by 2022. PAN has long-called for additional restrictions to be placed on glyphosate during the phase-out period, including bans on non-agricultural use, use by private citizens and an end to it being used to dry out crops before they are harvested, a common practice in the UK.

By proposing a five-year re-authorisation with no restrictions, the Commission is ignoring the wishes of European citizens and the wealth of scientific evidence showing glyphosate to be harmful to both human health and the environment.

Despite huge public opposition, the UK government sadly voted in favour of re-licensing glyphosate. This is particularly concerning given our imminent departure from the EU. Even if the EU does implement a glyphosate ban before the end of the year, there will be intense lobbying from the pesticide industry and others to overturn it at the first opportunity.

PAN UK will continue to watch the glyphosate saga closely and lobby for an end to the use of this toxic pesticide across Europe.

See below for a full list of how all EU Member States voted.

Following today’s meeting of the Standing Committee on Plants, Animals, Food and Feed (SCOPAFF) it appears that we are no nearer to an answer on the future of glyphosate in the European Union.

Representatives of Member States failed to reach agreement on whether or not the controversial weed killer should have its approval renewed. The European Commission’s proposal to renew it for periods of either ten, seven or five years all failed to gain sufficient support. The Commission will now take into account the views of Member States and return in November for further discussions.

However, in what can be seen to be very encouraging news, there was more opposition to approving glyphosate than had been expected. Belgium, Greece, Croatia, France, Italy, Luxembourg, Malta, Austria, Slovenia and Sweden were all opposed to renewal.

Sadly the UK was in favour of continued use of glyphosate thus following its long ignoble tradition of siding with the pesticide industry rather than voting for greater protection for the health and environment of the people of the UK.

The vote is now due to be held in just under two weeks’ time on 6th November. PAN UK will continue to work with our colleagues to put pressure on relevant decision makers to ban glyphosate in the EU once and for all. 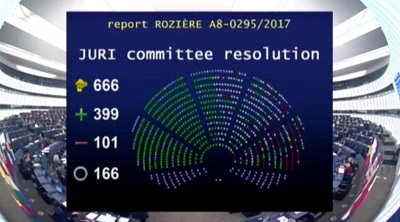 PAN UK welcomes the result of today’s (Tuesday, 24th October) vote in the European Parliament which passed a Resolution calling for restrictions on the use of the controversial weed killer glyphosate. Whilst the resolution does not call for an immediate ban it does insist on a phase out of all uses within the EU by 2022. Also included on the recommendations of the Resolution are calls for an immediate ban on all non-agricultural uses of glyphosate.

PAN UK once again applauds the European Parliament and the MEPs, including those of the UK that supported this Resolution. Whilst it is non-binding it sends a clear message that the will of the people of the EU and of their representatives in Parliament clearly see that it is time to get rid of this insidious chemical.

It is to be hoped that this Resolution, the 1.3 million signatures from EU Citizens and the clear evidence that viable alternatives are available will be reflected on Wednesday, 25th October, when the final decision on glyphosate approval is expected to be delivered by the European Commission.