Our Vision for UK Agriculture Outside the EU 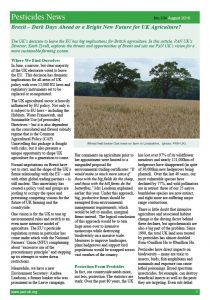 Brexit has major implications for UK agriculture. PAN UK is calling on the government to take this opportunity to create a new agricultural system that works for farmers and the environment by replacing the flawed common agricultural policy with a new system that rewards farmers for looking after our environment; gives smaller farmers a greater share of the subsidies; and supports organic agriculture. Brexit should not be an excuse to roll back environmental protection, in fact we should do more to boost biodiversity and cut pesticide use.

The UK’s decision to leave the EU has big implications for British agriculture as the UK agricultural sector is heavily influenced by EU policy. Not only is it subject to EU laws – including the Habitats, Water Framework, and Sustainable Use [of pesticides] Directives – but it is also dependent on the convoluted and flawed subsidy regime that is the Common Agricultural Policy (CAP). Unraveling this package is fraught with risks, but it also presents a unique opportunity to shape UK agriculture for a generation to come.

One of the key issues will be how any changes to the current regulations on pesticides are adapted. Defra has stated that “the UK government will also be reviewing pesticide rules as part of the preparation for EU exit.” It is vital that there is no weakening of existing regulations that are currently in place and that the UK develops a robust, sustainable pesticide regulatory system that ensures the most hazardous pesticides are taken out of use and that there is an overall goal of reducing significantly the use of all pesticide throughout UK agriculture.